And so we reach the Nemesis of anyone who has any involvement with computers. I don't want to start giving you nightmares but viruses really are a serious threat. Many years ago viruses were usually written by geeks and, disaffected geniuses, who wanted to prove themselves the best among their peers or settle a grudge.

Nowadays this has all changed. Organised crime, Terrorists, and Fraudsters are deluging the internet with a constantly changing barrage of different ways of causing disruption, and, more worryingly, stealing your hard earned money. The Banking Code includes a clause whereby if you do not have an up-to-date anti-virus program running on your computer and your details are stolen over the Internet then your money may not be protected. 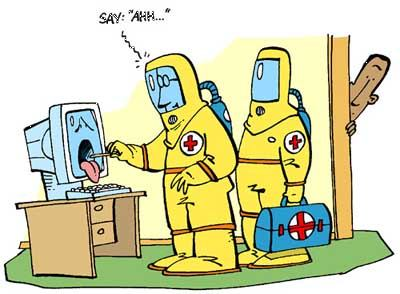 In every 6 month period more new viruses are being released than the total release in all prevous computer history. In short they are growing exponentially. Recent tactics of virus writers include launching 100's of thousands of variants of the same virus in the hope that anti-virus providers can't keep up with fixes and infecting the hidden boot part of USB memory keys that are regularly used to get data on to computers that do no go on to the Internet.

Another way of infesting your computer is to make a fake messages pop-up in the notification area of the task bar (usually the bottom right of your screen where the time and date is). the wording of such a message will be very similar to genuine messages you may get from time to time. For example, "your anti-virus program is out of date. click here to update now." or "Windows updates are available. Click here to update now". what these messages should read is "I'm a virus but I can't do any damage right now. If you click on me then you will give me permission to infest your computer by bypassing any antivirus program you may have because you will have given me permission to run.".

Mallicous program writers are now that cheeky that they will even pay the likes of Google to advertise themselves. Obviously they are not going to appear as a virus but what they do is appear when you are searching for other downloads. Almost every search for a popular download like Itunes or Adobe Reader will result in adverts from what are simply fake sites. While they will offer you what you want it will usually come bundled with stuff that can be very unsavoury to say the least.

Some of these offerings have become so cheeky that genuine cleaning programs are not allowed to describe these programs as mallicious. they must now be called PUPs or Potentially Unwanted Programs after some pan-European court cases.

The way of avoiding the worst of this type of infection is to never click on these messages. Go to the program in question and do the updates manually. If you are already up to date then press and hold the power button until your computer goes off then restart your computer (after disconnecting from the Internet) and do a full virus scan. OK you will loose any unsaved work but that is usually better than the alternative.

Probably our most commonly provided service is the removal of viruses which, by the way usually costs only £60, (can be upto £80 in extreme circumstances) and includes BULLGUARD antivirus for 12 months worth £50, but since prevention is better than removal nothing is better than using a proprietary anti-virus program and being vigilant when you use your computer.

USE AN UP-TO-DATE ANTI-VIRUS PROGRAM

Free anti-virus programs can be very good but their features are usually a generation or two behind the full paid for ones and updates usually go to paying customers first. At The Webworks we are avid fans of Martin Lewis and www.moneysavingexpert.com. There is a very good page on their site about safety software click here to view it.

We do however disagree with the level of faith that should be put in these free programs. Yes they are good but do not offer protection against the latest and emerging methods of infection.

With our range of professional protection software starting from as little as £6 per PC per year can you really afford a freebie?

PROTECTION IS NOTHING WITHOUT VIGILANCE

You can have all the protection in the world on your computer but it can count for squat if the organic bit behind the keyboard (THIS MEANS YOU) doesn't pay attention to what is happening on their computer. Sudden slow-downs and pop-ups are a common indication but also fake Windows messages are an increasingly used to get your permission to infect your machine without your anti-virus software kicking up a stink.

If you think you may be infected turn your computer off (press and hold the power button for 6 seconds if you have to) and give us a call - advice is always free.

Many people have reported they are receiving cold calls claiming to be from Microsoft or their Internet service provider stating their computers have detected a virus on the customers computer. they back this claim up by getting the customer to open up a log of errors on their own computer and then offer to remotely connect to their computer to fix the viruses for a fee. ALL OF THESE CALLS ARE A SCAM. Microsoft confirmed in a recent press release that they NEVER call anyone. These error logs exist on almost all computers and are generated when the slightest fault occurs even if you pull a pen drive out too early.

Cyber crimes number more that all other crimes put together

We can fix you computer but Action Fraud can help you avoid being a victim.
Report it NOW.

We believe our virus removal/cleanup service is the most thorough around and includes where necessary.

Windows 8 and 10 can look a bit different and can be quite daunting. There is a simple answer though in the form of a program called Clasic Shell. It brings back the traditional start menu, search box and simple access to many common Windows features.
You can download it from here